Fish Lane Town Square has tipped out competition from China and the US to win an international award for landscape architecture.

The transformation of the disused car park in South Brisbane into a thriving urban landscape captured the attention of the judging panel to win the Built Urban Design category of the World Landscape Architecture awards.

The project, a collaboration between RPS, Aria Property Group and Richards and Spence Architects, garnered global design praise that RPS executive director for place and environment Susan Farr said showed forgotten and disused spaces could be returned to the community.

“Fish Lane Town Square is an immersive sub-tropical oasis in the heart of South Bank. Before this transformation it was a fenced-off space you would walk past and not look twice at … now, it’s a place that truly draws you in,” she said.

“Fish Lane is a perfect example of the opportunities we have to transform forgotten, under-utilised ‘dead space’ into places that the community can enjoy.

“I’m really proud that our team has been recognised on the global stage for pushing the envelope of placemaking.” 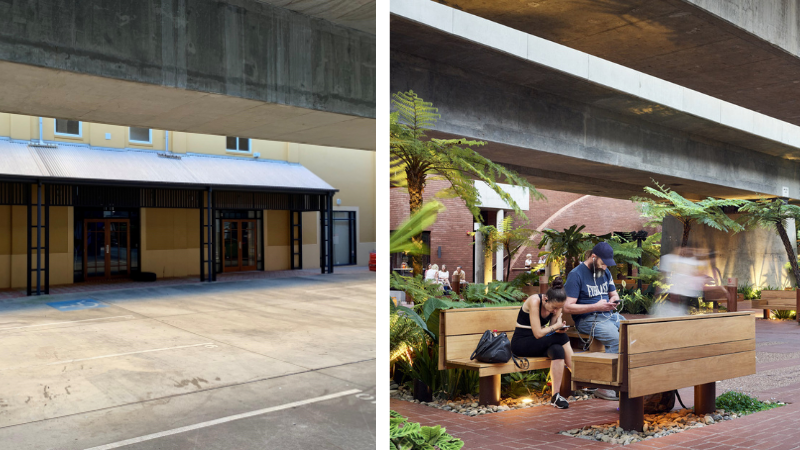 There were more than 400 submissions for the awards that promote the work of landscape architects globally.

The planting design for the Fish Lane project was quintessentially Brisbane, including tree ferns and Australian fan palms with an under-storey of native and exotic species chosen to suit the site’s microclimate.

According to an RPS spokeswoman the design process began in 2017 as part of collaborative discussions with Brisbane City Council, Queensland Rail and other stakeholders.

“The result is a lush and vibrant public space offering for the community,” she said.

“The project benefits the Brisbane community while at the same time encouraging and fostering business opportunities for local retailers who now have high visibility shopfronts and public areas of interaction that create a sense of local community.

“During the design process there were definitely moments when we knew the space would be something special that Brisbane could showcase on the world stage.”